No, tell us how you really feel about having your

No, tell us how you really feel about having your picture taken.

I've always thought of these two lovely ladies as my neices, but they are in fact my wife's cousin's daughters, making us 2nd cousins once-removed. And we were once removed, although not from this bar this night.

Born and raised in NYC, I have known them since they were 4 and 5 years old and have had the delight of watching them grow into fine young ladies. Oh, the New Years parties we had at their mother's house.

S, the one with the finger, is leaving the city soon to persue a life-long dream of visiting Alaska. There she will be returning to school, and while I am incredibly proud of her and happy for her, I am also terribly sad to see her go.

Posted by chazlitt at 4:19 PM No comments:

Out the Window Backwards

Posted by: chazlitt
Out the Window Backwards
My granddaughter caught reflected in the car window.
Posted by chazlitt at 6:49 AM 1 comment: 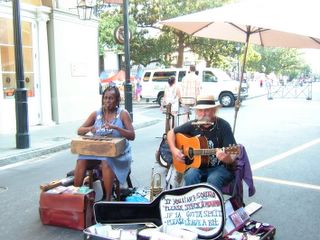 And while I'm at it

I might as well explain to myself just why bother with all this. Y'see, back in the days of journal-keeping a looong time ago, it became a pain in the ass to keep straight all the little spiral-bound pocket notebooks, so much so that I just just would toss them into a desk drawer where they grew like mushrooms. Unwieldly. And I, being at heart a lazy son of a bitch, just left then there to rot.

This might be easier to do. Everywhere I go there's a PC. I can always sneak on and write. Sorta handy. Suits my purposes.
Posted by chazlitt at 9:44 PM No comments:

I've been in an odd place

for the last week or so. Trying to capture these snippets of thoughts and nail them down. You know how it is when you have a really fleeting thought that seems important somehow and you just can't get your fingers around them, like tendrils of smoke.

Great thunderstorm last night starting around 11 pm. I especially enjoy thunderstorms, in spite of having been too close to them at times.

When I was a little kid, I lived in a small town in Colorado about half-way between Denver and Boulder. It was about a mile square and although you could see the mountains to the west, it was still enough out on the plains to be fairly flat. Today the town of Broomfield is it's own county, and there is development practically from Colorado Springs to Fort Collins and beyond, but when I lived there, there was nothing - most of the town hadn't been built yet.

The summer between my 7th and 8th years was a dry, windy summer as I recall. Knowing that the next day was supposed to have high wind, my little brother (P) and I rigged up a bedspread as a parachute. We were already good at parachutes because we used to climb up on the garage roof and jump, fully expecting to float slowly down. Never happened, of course. We hit the ground pretty hard, but we sure thought we knew about parachutes.

So on the morning of the storm, we were ready with a wagon, a bicycle, and a parachute. The wind came as it was supposed to and it was a good wind - 40-50 mph. I tried first with the bicycle. I could almost catch a breeze, but with the parachute tied to the handlebar stem, it just wouldn't get enough air. So we tied it to the handle of the wagon. P got in the back, since I was the big brother and got to steer. I stood with the rope to the parachute and the wagon handle between my legs and held the chute open to catch the air. And it did!

We got about halfway up Kalmia, heading towards the Kohl Cottage School before mom came tearing out of the house chasing us yelling at us to jump out of the wagon. Jump out?!! Both of us had been skinned enough on gravel to know that that would hurt a lot and besides, the chute was working. Why jump out?

We found out why the hard way. Can't steer. Can't stop until the wind dies down or you hit a curb. Guess which.

With the luck of the stupid, neither of us got hurt, which was good because Mom was in no condition to help us. She was laughing too hard to stop.

Now the thing that strikes me today is that Mom knew we were going to try this little stunt, and was watching the whole thing from the window. She didn't expect it to work, (maybe knowing more about sails than we did) but just let it happen. then when it did happen, she thought it was just as much fun as we did.

So this is nothing about thunder and lightening and all about being a stupid kid, and being the kind of parent that lets their kid sail away.
Posted by chazlitt at 2:34 PM 2 comments:

Cowboy Junkies, Lay It Down

A personal favorite. A perfect CD
Posted by chazlitt at 11:33 PM 14 comments: